Goethe: The Poet and the Age, Volume 2: Revolution and Renunciation, 1790-1803 Nicholas Boyle 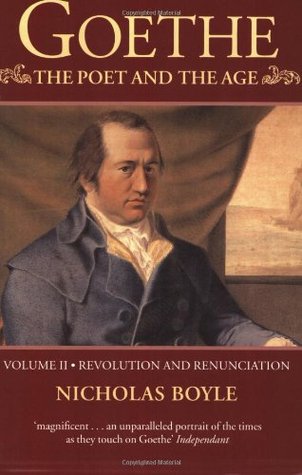 Doris Lessing, in The Independent, called it biography at its best. And The New York Times Book Review hailed it as a remarkable achievement, adding there is nothing comparable to this study in any language.Now comes the second volume of this definitive portrait, published on the 250th anniversary of Goethes birth.

Here Nicholas Boyle chronicles the most eventful and crowded years of Goethes life: the period of the French Revolution--which turned Goethes life upside down--and of the philosophical revolution in Germany which ushered in the periods of Idealism and Romanticism. It was also a period dominated by two intense personal relationships--with Schiller, Weimars other great poet, philosopher, and dramatist, and with Christiana Vulpius, the mother of his son.

Boyle paints vivid portraits of Goethes harrowing experiences of the Revolutionary wars, of the explosion of new ideas in philosophy and literature which for ten years made Jena the intellectual capital of Europe, and of the upheavals sparked by Napoleon which destroyed the Holy Roman Empire.Boyle captures both the large-scale events that swept Europe and the personal dramas of this exciting time. And he offers brilliant new analyses of Goethes works of the period, most notably Wilhelm Meister, The Natural Daughter, and Faust.

Indeed, this volume is a major work of historical and literary scholarship, and an important biography of one of the giants of Western culture.