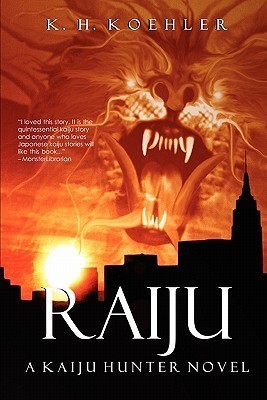 Koehler has a hit with this book. Rousing action, teen angst, and just enough Japanese myth to whet our appetites. In short, this book rocks!” -- SurvivalWeekly.comBeing a teen wizard sucks…So there I was, Mr. Nobody.I had to stop a monster, the military, and the President of the United States from turning the country into a nuclear wasteland.And I had to do it by slaying a god, and, quite possibly, by killing the girl I loved.And you think you have problems…His home destroyed by a rampaging kaiju, or giant monster, Kevin Takahashi and his father relocate to New York City where Kevin believes the nightmare is over and the only battleground left to face from now on is high school.But soon after his arrival in the Big Apple, a new kaiju emerges.

Qilin is so powerful that even the U.S. Military may be unable to contain or destroy the monster. And if that isn’t bad enough, Kevin is falling in love with Aimi Mura, the resident “bad girl,” and the girlfriend of the toughest bully in school.But will Aimi still want him when she discovers his darkest secret? Because Kevin is more than a ragged refugee from the now defunct city of San Francisco.

He’s also a Keeper–a teen wizard who can summon ancient, demonic god-beasts to do battle for him, and his creature to call is Raiju, the oldest of the ancient Kami.Kevin has only a short time to win Aimi over and save the city of New York. Because Raiju and Qilin are about to clash, and after the dust settles, there may be no home left for either one of them!