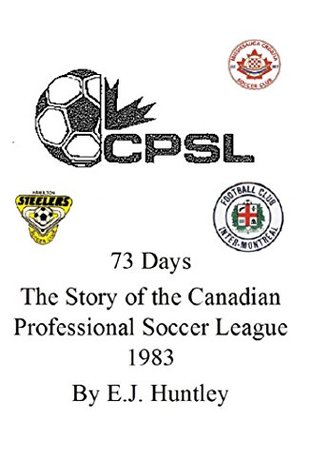 For the first time the full story of the Canadian Professional Soccer League 1983 is told. Involving six teams - Edmonton Eagles, Calgary Mustangs, Inter-Montreal, Toronto Nationals, Mississauga Croatia SC and Hamilton Steelers - four of them ran into financial problems with almost breath-taking alacrity and two would fold within weeks of the leagues kick off on 21st May 1983. The book - featuring contributions from some of those involved - investigates the leagues formation, the philosophies that underpinned it, the recruitment of its players, its launch, its fixtures, its low attendances, its owner bail-outs, its player walkouts, its teams folding, its wage disputes, its premature abandonment of its league schedule and premature introduction of play-offs and ultimately its demise and, ultimately, the reasons for its failure.

The book places the league in the context of what was a turbulent time for Canadian soccer - involving as it did its bid to host the 1986 World Cup, its Soccer Associations proposed creation of a club side who it was hoped would develop into a team capable of qualifying for it, a busy schedule for its national side, the decline of its existing professional soccer teams plying their trade in the North American Soccer League, which too would cease operating in 1984.

The book also looks at what happened to the personnel involved in the immediate aftermath of the CPSLs demise and the subsequent attempts to re-introduce a professional soccer league to a country where history strongly suggests the likelihood of success for any such league remains and perhaps always was slight. The book also contains an almost comprehensive full run-down of squad personnel, results and scorers.

Comments
Comments for "73 Days - The Story of the Canadian Professional Soccer League 1983":